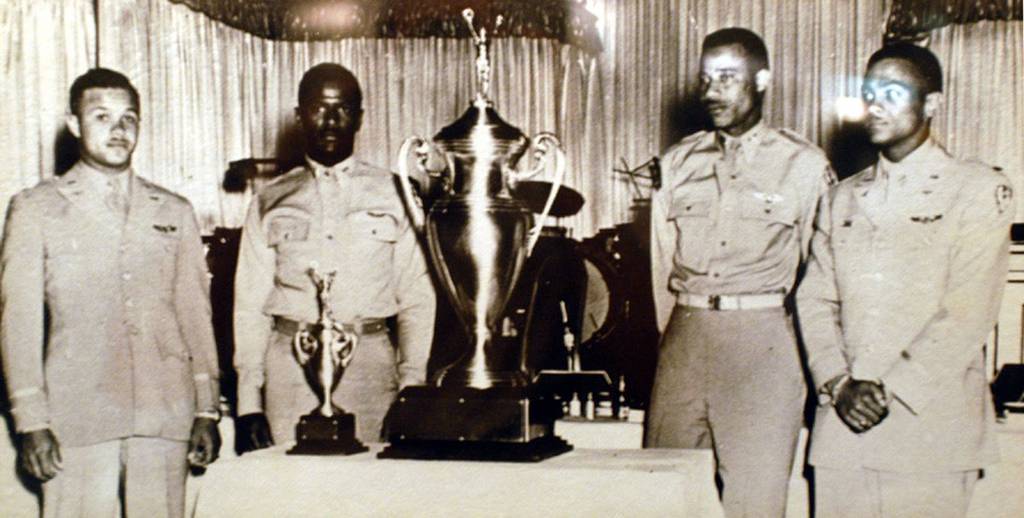 Harvey, one of the few surviving members of the Tuskegee Airmen, wants an honor that eluded the public for nearly 50 years to be remembered: winner of the first “Gunsmoke” aerial shooting competition in 1949.

The 98-year-old retired Lt. Col. spoke to the Air Force Times ahead of a September 21 ceremony here to honor his legacy as an air force ace, hosted by AARP and Raytheon.

Harvey first imagined himself as a pilot as a child in Nuangola Station, a rural area outside of Wilkes-Barre in eastern Pennsylvania.

He says he tried to enlist in the Army Air Corps in January 1943, when World War II was in full swing. Despite impending Allied invasions of North Africa, Italy, France and other Axis-controlled countries, the military rejected it.

“They said they weren’t accepting enlistments at that time,” he said. He thinks it’s because he’s black.

Still, Harvey was drafted into the military a few months later. He first traveled to Jefferson Barracks, Missouri for basic training and then moved on to engineer training, where he learned to bulldoze and set up airfields in the jungle. But he still wanted to be in a cockpit.

He applied to become an aviator again and took the exam at Bolling Field in Washington to attend pilot training school.

“There were 10 of us to take the exam: nine white people and me. Two of us were successful, ”Harvey said.

He became one of more than 1,000 black men trained in Tuskegee, Alabama, from 1941 to 1946, who were the first African-American military pilots in American history. The Tuskegee Airmen included more than 14,000 black men and women who worked in various aviation and clerical jobs in these squadrons and groups, and others who were stationed at their bases.

Joining the Separated Army gave Harvey his first taste of racism, he said. With no desire to participate in the growing civil rights movement and no television to watch it at home, Harvey waged his own campaign to be seen as an equal within the Army Air Corps.

The self-describing perfectionist and loner talks about his military service in layman’s terms: “I’m here to do my job to the best of my ability. “

He learned to fly at Moton Field and Sharpe Field, Alabama, according to the Department of Veterans Affairs. After graduating as a second lieutenant in October 1944, Harvey flew P-47 Thunderbolts with the 99th Fighter Squadron at Godman Army Airfield, Kentucky.

Despite the 99th’s earlier support in Allied operations across Europe and North Africa, Harvey never had the chance to visit Europe or Japan until the end of World War II in 1945, according to the VA.

In 1949, however, the newly formed Air Force staged a new kind of competition: air-to-air and air-to-ground “Gunsmoke” artillery fire met at what is now Nellis AFB, Nevada, with separate events for conventional engines. and jets.

Each group of fighters were tasked with organizing a shoot-off and picking the three highest-rated pilots to represent them in the first-ever “Top Gun” contest, Harvey said. The 332nd Fighter Group at Old Lockbourne AFB, Ohio called in Captain Alva Temple of the 301st Fighter Squadron, 1st Lt. Harry Stewart of the 100th Fighter Squadron, and Harvey to participate, along with 1st Lt. Halbert Alexander of the 99th like an alternate.

The black pilots led after both aerial gunnery events and faltered during the dive bombing portion, but maintained their lead long enough to win the inaugural Fighter Gunnery Award. Then their victory made history, according to Harvey.

Harvey said Air Force-related records, like the Air Force Association’s annual almanac, did not list their accomplishments. For example, the 1996 almanac lists Lieutenant Calvin Ellis of the 4th Fighter Wing at Langley AFB and Lieutenant William Crawford of the 332nd FW at Lockbourne as the 1949 Gunsmoke winners.

Stewart helped bring the information back to light in the 1990s so that the Tuskegee Airmen’s victory was properly recognized, the service said in 2012.

The trophy has been missing for decades, Harvey said, but was stored in the early 2000s and is now on display at the US Air Force National Museum in Wright-Patterson AFB, Ohio. It is named after Harvey and his teammates, the aviators who won the jet class competition in 1949 and the two winning teams in 1950.

The trophy lists Temple as major, Stewart as captain, and Harvey as lieutenant.

The 99th was disaggregated and disbanded in July 1949, following President Harry Truman’s 1948 order to join the armed forces.

Later that year, Harvey deployed to Misawa Air Force Base in Japan to pilot the F-80 Shooting Stars – America’s first jet fighter – during the Korean War. There, he was appointed captain before heading to the now closed George Air Force Base in California to become an instructor and test pilot with the 94th Fighter Interceptor Squadron, according to his personal website.

In 1960 he became a NORAD Flight Safety Officer, Combat Training Officer at the now defunct Northeast Air Command Headquarters on the island of Newfoundland, Canada, and in post. leadership at the 1st Fighter Group and the 71st Fighter. Interception Squadron at Selfridge AFB, Michigan.

At the end of his military career, Harvey was posted to another NORAD region headquartered at Truax Field, Wisconsin, working for the commanding general and his staff. He retired from military service in 1965.

In the corporate world, he rose through the sales ranks at Oscar Mayer until his retirement in 1980 as the first manager of the company’s black distribution center in Denver, Colorado.

Eight decades after the Tuskegee Airmen made history, Harvey is happy to see another milestone: the debut of General Charles “CQ” Brown last year as the first Chief of Staff of the United Nations. Black Air Force.

When asked what it meant for him to see that barrier broken, Harvey got angry. For him, the accomplishments of Brown and other black generals are reminiscent of what the black community went through when a 1925 Army War College report declared them inferior to their white counterparts.

“All members of Congress had read the report, all army commanders had a copy of the report, and all the report did was reinforce the racist attitude they had towards us,” said Harvey. “We had to overcome it all, and we did. “

The report, released two years after Harvey was born but almost two generations before Brown’s time, turned out to be false again, the older man said.

Harvey continued his efforts to educate the public about his winning Gunsmoke team as he outlasts most of the other Tuskegee Airmen, including Alva Temple and Halbert Alexander. But he wants his legacy to be made of humble things: he did his best; He was nice; he had a good sense of humor; she was a good person.

“If it comes, it comes,” he said of the death. “But I expect to delay it… for many more years.”

Rachel Cohen joined the Air Force Times as a senior reporter in March 2021. Her work has been featured in Air Force Magazine, Inside Defense, Inside Health Policy, the Frederick News-Post (Md.), The Washington Post and others. .