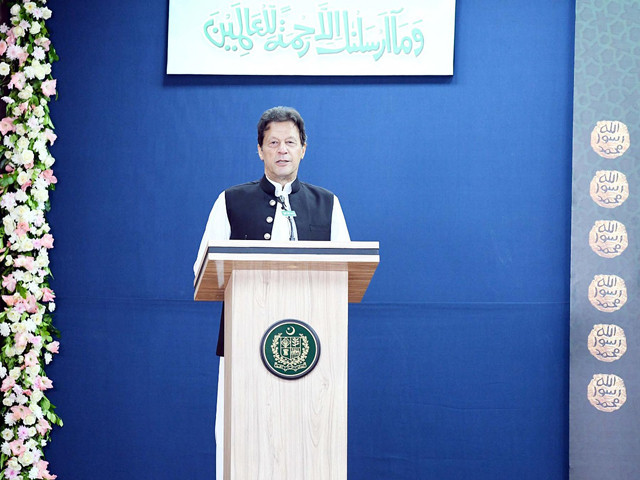 Prime Minister Imran Khan said on Sunday that no nation can progress if it lowers its moral standards while announcing the formation of the Rehmatul-Lil-Aalamin Authority, aimed at presenting the true image of Islam to the world.

“Many scholars will be part of it (authority). One of the authority’s tasks would be to tell the world what Islam really is, ”he told the Ashra-e-Rehmatul-Lil-Aalamin (PBUH) conference in Islamabad.

The prime minister said prominent academics will be part of the authority that will oversee the schools’ curricula. “They will tell us if it (the curriculum) needs to be changed. Other religions will also be taught. [at educational institutes],” he added.

He said one of the academics will deal with media and social media issues.

“The cartoons we show our children portray an alien culture. We can’t stop them but we can offer them an alternative.”

He said the authority will conduct research in universities that have never been done in Pakistan before, adding that it will also assess the pros and cons of “Western culture” and its effects on Pakistani society.

“When you bring western culture [to the country], it is necessary to evaluate what are the advantages and what are the disadvantages because they have a better morality [than ours] but it also affects our family system. We haven’t done any research on it, ”he explained.

“No nation can progress without ethics and morals”

Prime Minister Imran said that no nation can progress if it lowers its moral standards. “If society is not against corruption, then how can the system improve? Society as a whole fights corruption. A government has limits, but if a company goes up, corruption cannot exist, ”he said.

Senior leaders in Western countries, he said, should maintain even higher moral standards than the general public, adding that if they are caught lying, then they are forced to resign. “When Hitler attacked Britain, people asked Churchill if they would be saved [from destruction], he said, does our justice system work? Someone said yes, he said yes then we will be saved. “

The prime minister said the FACTI panel came to the conclusion that the leaders of the poor nation are taking money away from the country and this is how they become poor. “If someone loots your country, they run away to London but people are still pouring rose petals at them … how can such a society go forward?”

He said China lifted the most people out of poverty in human history and did so by reducing the threat of corruption. “In China, tens of thousands of people have been jailed for corruption and look how it is [China] rule the world today, ”he added.

Prime Minister Imran said that all elections after the 1970s elections were marred by allegations of rigging and that the government in power never wants to change the system because it is easier for them to manipulate the system. However, he added, the PTI is the first ruling party to seek electoral reforms. “Anyone who says that [2018] the elections were rigged are against electronic voting machines (EVMs). “

He said Pakistan was the first country to introduce neutral cricket referees against the most powerful teams in the world and added that it also wanted to bring the same neutrality to the elections.

“Youth must fight against corruption”

The Prime Minister said that as a society we must feed young people so that they fight against corruption. “I came here today because I wanted to speak to young people since they are the majority in Pakistan.

He said that when he first went to England at the age of 18, he saw with his own eyes the role models of that society on a path of self-destruction.

“I saw a lot of them follow the path of destruction … there was a footballer who later became my friend … he took drugs … he went to rehabilitation but could not recovering … he died at 50, “he said and added that in the later stages of his cricket career he too took this route.

The Prime Minister said that our real role models are not taught in schools. “Have we already followed the life of the Prophet (pbuh)? We have the Quran in our homes but we never bother to read it … we are ready to give our life for the name of the Prophet but we do not follow never his teachings … He was a blessing for all mankind and not just for Muslims. “

“Can you imagine Hazrat Ali (RA) as the Caliph of the entire Muslim world losing his case against a Jew? Can you imagine this kind of justice even in modern democracies? This concept was given by Islam.

He said the world is talking about climate change but this concept was given by Islam 1,400 years ago.

He said that although the Byzantine Empire was a superpower in its day, people came to Muslims because they had a better justice system by following the guidance of the Prophet (pbuh). “The weak need justice, the rich never want justice because it doesn’t suit them… they only want NRO.”

Judicial system and rule of law

Prime Minister Imran said that all successful nations today have an excellent judicial system and the rule of law. “Riyasat-e-Madina was the first welfare state [in the world], where a particular emphasis was placed on education and not only for men but also for women … unfortunately many conservatives still oppose it today, “he added.

He said that the message of our religion should be taught to children in school and that our true role models and their efforts should be brought out.

The prime minister said that millions of people followed the teachings of Nizamuddin Auliya, Data Ganjbaksha and Baba Farid Gunj Shakar among other Sufi saints because the message they gave was of humanity and unity. He said that during Urs, hundreds and thousands of people flocked to their shrines to pay homage to them. However, he added, many of them do not know the teaching of the saints.

Muslims debated children’s rights in the 9th century, but today we do not do any research on this, the prime minister said.

“I don’t want young people to fall into the same trap I fell into when I visited Britain. We are programmed to be backwards and the West is one step ahead of us.”

He said Pakistan was a big ideology and a big dream. “If we want to lift Pakistan, it is necessary that we follow the Sunnah,” he added.