Note: This review is based on the Japanese release — the game will launch in North America and Europe on June 24, 2022.

pocky and rocky, a Super Nintendo run-and-gun, was developer Natsume’s gold standard, fondly remembered for its tense arcade action, adventurous stage design, and stunning visuals. Where Tengo Project’s Wild Guns Reloaded and Ninja Warriors Once Again were deliciously bloated remasters, Pocky & Rocky Reshrined is a re-vision so markedly different from the original that it’s essentially an entirely new game. Completely redesigned from the ground up, it’s nothing short of magical from the flute ditty that makes up the opening title screen to the first stretch of road and beyond. Fallen leaves are moved as you glide over them, floating down to settle on cobblestones; weather effects desaturate the world with sepia flashes; the special effects, especially around the boss entrances, are dazzling.

The Super Nintendo game’s distinct Japanese theme, traveling to old Japan as a Shinto shrine maiden and tanuki raccoon dog, was one of its most endearing aspects. This was not lost on the art team at Tengo Project, who strove – and succeeded with aplomb – to cram every inch of their freshly rendered maps with charming attention to detail. Water reflections, chattering streams, sun-drenched rice paddies and fiery village backgrounds are all beautifully crafted, while the raging cast of Japanese mythological enemies positively bleed personality. These visual ingredients, brought to life by superb animation, are almost Metal Slug in terms of graphical precision. And, in case you were wondering, a scanline option with a range of densities is available, as is the ability to switch between languages. 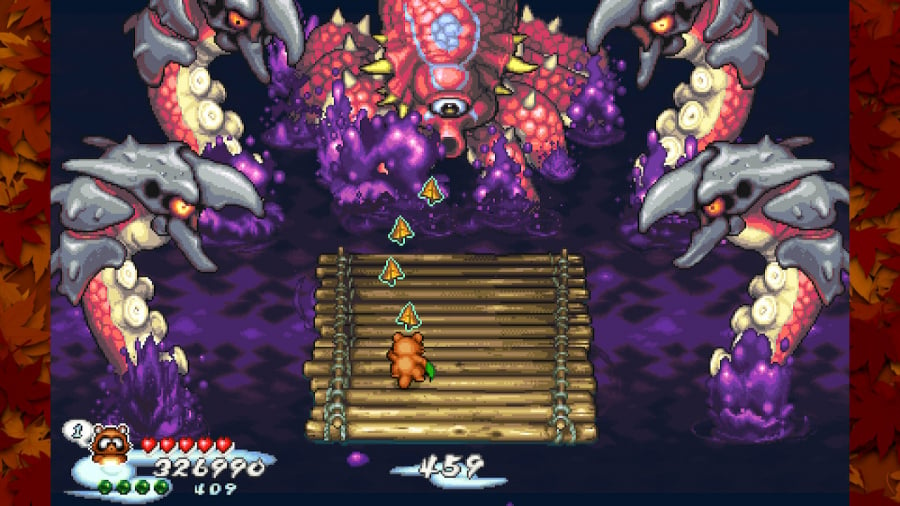 The switch and bait of Reshrined is that when you head to the first stage, it appears as a direct remake. Then, as you find yourself navigating small paths and stone steps, around turns and against cartloads of enemies, that notion begins to fade. The second stage, while thematically the same, moves even further, its layout and enemies fundamentally different. You fight roaming fire snakes with your repulse attack and bald, misshapen giants camped behind terracotta walls. When you finally get to the once-familiar octopus boss engage – now a rafted nightmare with an incredible visual bomb – it’s clear that this is a whole new ballgame.

Mechanically, it remains essentially the same. You have a rapid-fire projectile attack, defensive maneuver against incoming fire, quick belly slide to avoid danger, and limited smart bombs that don’t replenish after a kill. The knockback attack now does a lot more work and is more effective at knocking out enemies by bouncing their projectiles back at them. You always accumulate an extra life meter heart after each stage, and there are useful secrets scattered everywhere, regularly off the beaten path, in forest enclaves and glades, and quite often in the guise of stray chickens.

What’s new is that you’re forced to play one of five characters on different stages, each with adjusted weapon attributes, and one of which is only available on hard mode. In the third stage, newcomer Ame-no-Uzume grants new skills, allowing you to produce an orb that automatically directs your projectiles when fired, and a temporary shield that requires a brief charge period. These additional properties arrive just in time for a series of never-before-seen scenes (complete with all-new musical arrangements). Here, haunted rice paddies littered with thatched huts, pond demons, and aggravating spirits lead to deep caverns and Egyptian-style tombs, all of which require the use of your newly learned skills. While there are throwbacks to the airship scene and the original’s torchlit castle, the structure is completely transformed. 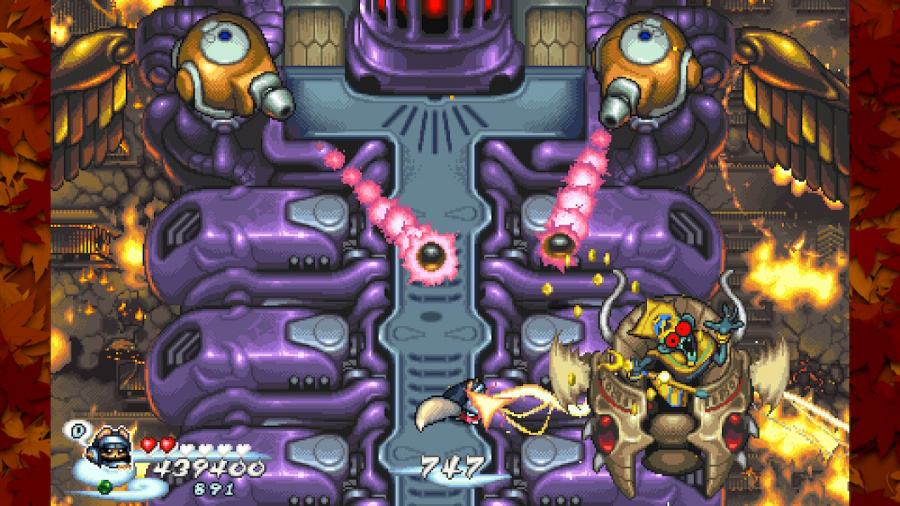 As we’ve played the Super Nintendo game to the present day – and with some conviction, we might add – we’re in a good position to draw direct comparisons. The most immediate difference is that Reshrined plays a slightly slower game. Like the original, it’s not designed to be torn apart: it’s dense, strategic conflict that requires moments of digging to clear the ground lest it all become too much. At the same time, the original is a little snappier, with its layout offering more leeway for impromptu slide negotiations and the ability to take out most on-screen enemies fairly quickly once you have an in-game strategy.

Both being superb examples of the genre, it’s hard to say which is more entertaining, although there’s something to be said for the 1992 game’s simplicity and faster pace. Reshrined works differently, weighing in at around a hour and 20 minutes end-to-end, compared to the Super Nintendo release’s 45 minutes on a clean run. The way the stages are formed – especially the new ones, which, while great, are arguably not as creatively inspired as the ones that inform the first 20 minutes of the game – is by having obstacles that force you to camp and clean before continuing. Some enemies, such as Fire Serpents or Worm-like Stone Hands, slow things down or even require a temporary retreat; while the airship stage – which was a forced-scrolling affair in the Super Nintendo game – is segmented here by doors that can only be opened by removing turrets. You can still find the odd gap to slip into in a pinch, but in general, Reshrined is more of a war of attrition. 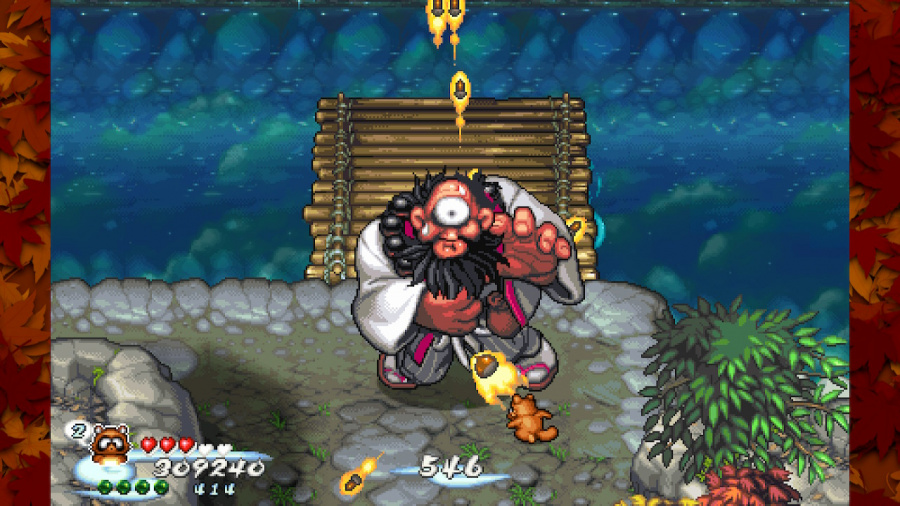 Powering up quickly is still key, only now it’s much easier thanks to plenty of weapon drops, and the game steers you slightly towards what’s best used for each stage. Additionally, when you take a hit, weapon icons are ripped from you, allowing you to collect them unless they end up splashing into a nearby pond.

In terms of difficulty, it’s maybe a bit easier than its predecessor, but not by much. While the aesthetic is cute enough to take a bite out of, it can be very punishing at times, and strict reflex honing and near-constant switching of offensive and defensive techniques is a requirement. That said, the difficulty curve seems twisty. The first stage is a gauntlet that really shows you the ropes, while other later areas sometimes dive into complexity, like the weirdly easy third stage boss. And, while Stage Four’s winding caverns aren’t too intense, its mammoth winged cow guardian – brutally tearing up the screen and intermittently freezing you with its stomp – really puts your pattern-trading skills to the test. ‘test. 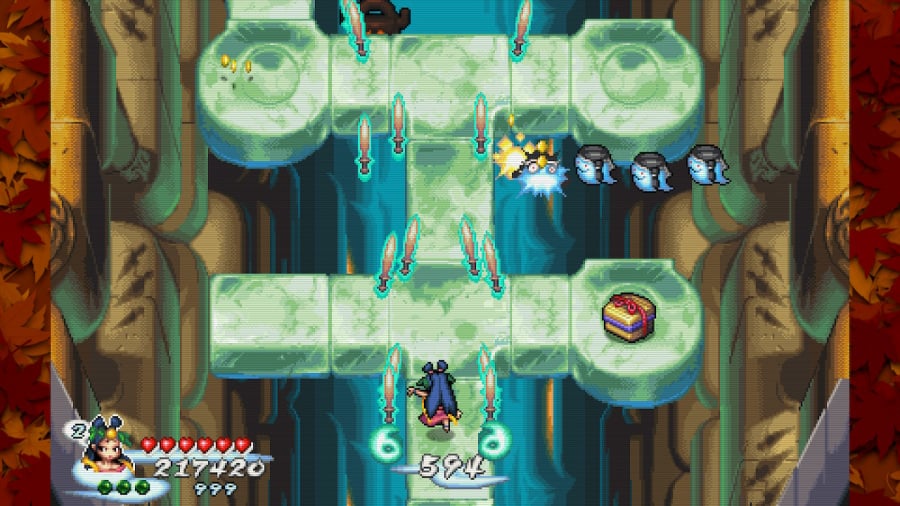 On the other hand, while clearing a credit is always a marked test, continuous reboot points are very comfortable, allowing almost anyone to end up doing it all. Once you accumulate 3000 coins swept away by destroyed enemies, you unlock an easy mode, providing infinite lives.

Although we draw many comparisons to the Super Nintendo game, Pocky & Rocky: Reshrined is, for the most part, a completely new entry in the series. And it deserves to be celebrated for several reasons. Tengo Project, well aware of the pedigree of the original, was smart enough to only use it as inspiration, rather than trying to keep up with it. Within this modern setting, the developer has constructed an exciting tapestry of lights, colors and action-packed moments for hardcore gamers to sink their teeth into. Is it better than Natsume’s venerable 1992 release? No, but it’s pretty much on the same level, although for slightly different reasons. Pocky & Rocky: Reshrined is a blessing, a gorgeous and delightfully artful new take on a much-loved classic, and a standout example of what can be achieved, creatively, with 2D support. If you’re even slightly into applying old-school gaming disciplines, you should definitely pick this up.