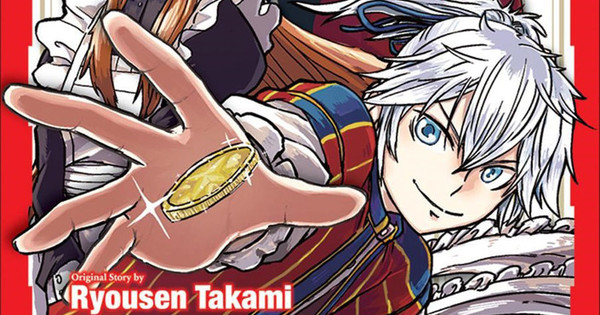 Multi-Mind Mayhem: Isekai Tensei Soudouki is one of those stories that has a stronger concept than the execution. Its premise is one that plays with isekai conventions, taking the idea of ​​a soul from our world reborn in a fantasy realm and running with it. Bard is an unsuspecting (and possibly unhappy) child who one day falls ill. Turns out it’s because (or at least not helped by) two souls are busy entering her body. One is that of Oka Sanei Sadatoshi, an elderly samurai from the Sengoku period who, after a life of war, is ultimately killed in a failed assassination attempt. The other is Oka Masaharu, a high school student who is run over by everyone’s favorite murder truck when distracted trying to decide if cat or dog ears are better for girls. Once the two realize that they are dead, they aren’t exactly thrilled, but more or less come to terms with the situation. Sadatoshi takes the news better than Masaharu, which makes sense; after all, he has been surrounded by death for his entire career as a warrior as Masaharu knows it best from pop culture. Even though they died centuries apart, the two end up inhabiting Bard’s body. It’s not explained, but it doesn’t necessarily have to be for the story to work; what is important is that a poor kid suddenly receives some free souls.

This, more or less, gives Bard a terrible case of Dissociative Identity Disorder in a very fanciful sense. We’re not entirely sure Bard’s original personality remains, which is a shame, as that would have been an interesting take on the reincarnation aspect of the story. The two Okas, however, retain their personalities and knowledge a lot, so there are at least two disparate personalities trying to share one body. When the story begins, Bard is a young teenager and his two piggyback personalities really make themselves known, much to the confusion of those around him. This is mostly revealed in the strange knowledge he has, something that seems to come largely from Masaharu.

We can say this for sure because Bard’s mother is a former mercenary with the truly unfortunate name of Maggot. Maggot trains his son with the sword and Bard, while not terrible, is also not good as far as we would know that Sadatoshi was in control of his body or sharing his knowledge. This is the most compelling argument that Bard himself is still there somewhere, even though it might as well be Masaharu who is the dominant personality in the body. Sadatoshi shines through in the application of Masaharu’s knowledge; he was a greedy man back then, and it was his desire that Masaharu’s modern craftsmanship be used to get them a stack or twelve of money. So while Masaharu may have been happy to get more accessible candy by teaching people how to refine sugar from sugar beets, Sadatoshi wants to use his skills to earn them money – which he does. it sure does.

Since it all seems like a really good time without doubt, it’s important to note where things go wrong in terms of execution. The fact that we can’t really tell if Bard is still a factor is certainly a problem, but the overall pace of volume is a big deal. He flies too fast, obscuring the relationships between the characters (including between the two or three inhabitants of Bard’s body) in favor of the introduction of secondary characters and a plot on a neighboring country that wants to take over the land. from Bard’s father. This merges with the sugar beet plot when Bard hires mercenaries to guard the beet fields, so they are right there when opposing forces attack. It happens so quickly that it feels less like a well-thought-out story and more like a series of ridiculous coincidences, with very few consequences that arise.

This is actually the main problem here: there are never any real consequences. Not for the many souls in Bard’s body, not for family dynamics, and not for political or economic situations. Everything is just brought up and left out as the book goes on, which leaves it all very insignificant. Why does Seillune care so much about Bard? Is there a point for Theresa beyond casting a predatory lesbian character? What’s wrong with the beast cultural norm that if you touch someone’s ears you have to marry them, which, judging by the reactions of doggirl Selina, is definitely a real thing? The story doesn’t have to be deep, but it needs to explain a little more than it seems to want to. Rubbing shoulders with DIY with tropes and general silliness isn’t a free “get out of the plot” card.

Since this is an adaptation of the light novels of the same name, the fault may lie less with the author and more with the way the adaptation is performed. And it’s really not without potential – the discovery at the end of the book that one soul or another may be able to fully take over Bard’s physical body has some interesting implications and room for hilarity, and the concept is really a lot of fun and may just need a little time to get started. But the lackluster art and frantic pace take away much of its entertainment value. It’s just not as fun as the sum of its parts.