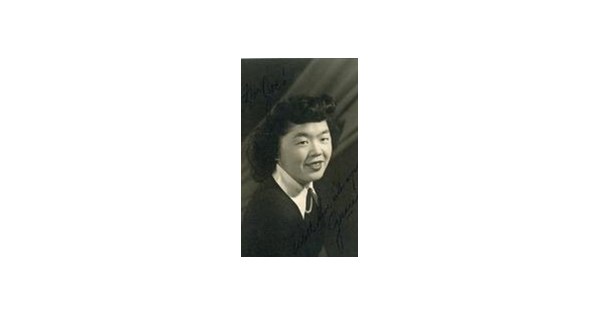 Grace Goto
July 18, 1927 – November 4, 2021
Resident of Richmond, CA
After a brief illness, Grace Yatabe Goto passed away peacefully as she slept on November 4, 2021 with her daughter and son, Jacki and Greg, in the house where she lived for 65 years.
Grace was born on July 18, 1927 in Sebastopol, California, the eighth of nine children born to Japanese immigrants Kuranoshin and Ito Yatabe. His family rented a property in various places on the northern peninsula and all the children worked very hard as farmers. Grace’s sister reports that she cried when she didn’t get what she wanted and was a “goof”.
When Grace was 15, her schooling was interrupted by the forced evacuation of Japanese and Japanese Americans, first to the Merced Assembly Center in Santa Rosa, then to the Amache internment camp in Colorado. Grace, her two sisters, her brother and her parents all lived in the same room. Her older sisters (adults with their own families) were sent to other camps across the country. They were released in the spring of Grace’s senior year and she graduated from high school in Fresno, California. Grace then moved to the Bay Area where she met Joe Goto. They married in March 1953, resided in Richmond and had 2 children. They traveled a lot and had many exciting experiences until Joe passed away in 2013 after 60 years of marriage.
Grace worked part-time at the Capwells department store so that she could always be at home when her young children left school. Later she worked as a cashier, then in the personal department of the Mechanical Bank. She retired after 21 years but has not stopped working. Grace volunteered at Kaiser Permanente Richmond for over 25 years, served on the boards of several organizations serving Japanese Americans, and was an active member of her church, Berkeley Higashi Honganji Buddhist Temple.
Grace was a outgoing person who enjoyed bowling, spending time with friends and family, was famous for her lemon meringue pie, and passionately encouraged her teams, the Oakland Athletics and the Golden State Warriors. She loved her children and her grandchildren. She traveled to Japan, Oregon and Indiana to help after the birth of her 4 grandchildren. Grace’s 94 years have been filled with love and laughter, and everyone who knew her will truly be missed.
Grace was predeceased by her husband, Joe, and all of her siblings. She is survived by her daughter Jacki Wolf (Steven), her son Greg Goto (Sakiko), her grandchildren, Braden Wolf (Katrina), Taylor Wolf, Rika Goto and Stanley Goto. No public service will be organized. The family will come together for a celebration of life. Any commemorative gift can be sent to Berkeley Higashi Honganji Buddhist Temple.