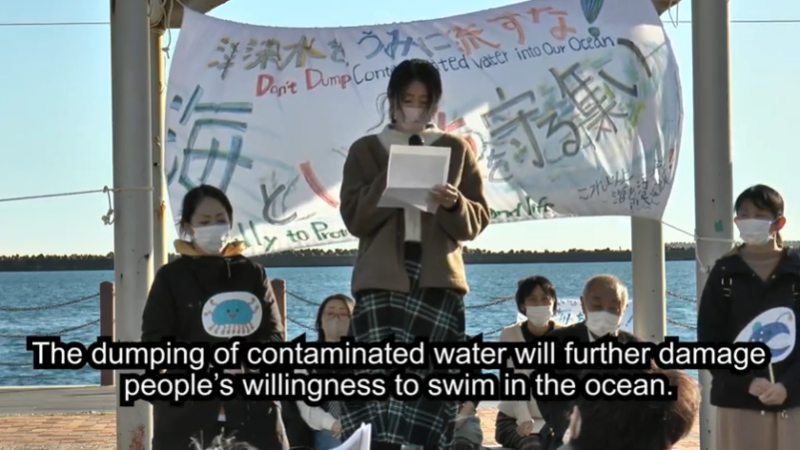 A screenshot from the Manhattan Project for a Nuclear Free World YouTube video featuring Japanese mothers from Okuma and Futaba townships protesting plans to dump radioactive water into the Pacific Ocean.

Residents of Japan’s coastal communities, joined by voices from around the world, denounced a new government plan to dump contaminated water from the site of the Fukushima nuclear disaster into the Pacific Ocean. Local communities and other nations in the Pacific Ocean fear the spill could poison the environment and cripple local fishing and tourism industries struggling to recover from the March 2011 nuclear accident on the northeast coast of Japan for over a decade.

According to a government plan released on December 28, 2021, the Tokyo Electric Power Company (TEPCO) will begin releasing 1 million metric tons of radioactive water from the Fukushima power plant into the Pacific Ocean in 2023. The plan, which is still in progress being developed over the coming month, says an underwater tunnel will be built to pump water out to sea. Funds have also been set aside to compensate local fishing and tourism industries for ” potential reputational damage ”.

In March 2011, an earthquake and tsunami caused the meltdown of three nuclear reactors operated by TEPCO in Fukushima. Over the years, the groundwater flowing through factories has been contaminated with radioactive content. In order to prevent this water from reaching the ocean, it was pumped from the reactor buildings into large reservoirs which now dominate the reactor facility.

As of December 2021, at least 1 million tonnes of contaminated water were stored in the reservoirs of the Fukushima Daiichi nuclear power plant.

While the highly radioactive contaminants are removed, the stored water that the Japanese government plans to pump out to sea still contains significant amounts of tritium, a radioactive element that some experts say is harmless when diluted in it. sea ​​water.

The Japanese government’s plan to pump contaminated water has been in preparation since 2020. Greenpeace said in April 2021 that it had collected 183,000 signatures opposing the project to discharge the water from the Fukushima plant.

Also in April 2021, South Korean civil society groups issued a statement condemning TEPCO’s plan, noting that “even diluted, the total amount of radioactive material thrown into the sea remains unchanged. If radioactive wastewater is discharged, it will be an irrevocable disaster not only for the marine ecosystem but for man.

The issue was addressed at the Pacific Islands Forum foreign ministers meeting in July 2021, and the body issued the following statement:

The Forum’s foreign ministers took note of concerns regarding the seriousness of this issue in relation to the potential threat of further nuclear contamination of our Blue Pacific and the potential negative and transboundary impacts on the health and security of the continent of Blue Pacific, and its peoples both in the short and long term.

The assessment found that the effects of the release of ALPS (Advanced Liquid Process System) treated water into the sea on the public and the environment are minimal, as the calculated doses were significantly below dose limits, dose targets and at values ​​specified by international organizations. for each species.

TEPCO assured the public that it is continually updating its scientific studies regarding the plan for the release of treated water into the Pacific. But doubts remain about their reports, mainly because there are still few concrete plans for how and where the contaminated water will be dumped, making it difficult for outside observers to assess the risk.

The Pacific Collective on Nuclear Issues, which represents civil society organizations based in Oceania, denies the veracity of these studies. He also has a message for TEPCO and the Japanese government:

The Pacific is not and must not become a dumping ground for nuclear waste.

The Collective considers that TEPCO, and the Japanese government agencies concerned, have wrongly prioritized convenience and costs over the short and long term environmental and human cost of their planned actions.

Greenpeace interviewed fisherman Ono Haruo from Shinchi Township in Fukushima, who echoed the sentiments of the locals:

The fish finally start to come back after ten years, but if they put tritium in the water now, no matter how much they dilute it, who is going to buy these fish? Who wants to eat poisoned fish?

The ocean is our workplace. Can you imagine what it feels like to be intentionally polluted?

It will take 30 or 40 years to see the effects. The causal relationship will have become unclear and it will be impossible to prove anything. What will happen to the future of our children, of our grandchildren? It is not even clear who will take responsibility.

A group of mothers from Iwaki City, Fukushima, participated in a protest in November 2021 to oppose plans to dump contaminated water into the ocean. The townships of Okuma and Futaba, home to the disaster complex of Fukushima Daiichi, have experienced almost complete depopulation over the past decade.

In spring 2022, the International Atomic Energy Agency will assess and report plans for Fukushima water treatment, while stakeholders will continue to engage authorities over TEPCO’s controversial plan.