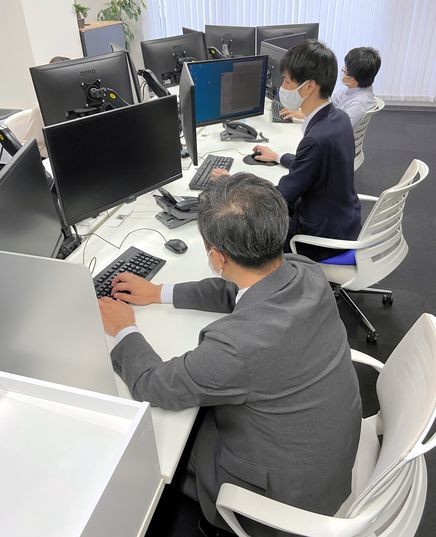 When a company held a rally for the students it was recruiting, officials told them about a new service that had yet to be released. Despite warnings about his confidentiality, a recruit tweeted about it.

Because of this failure, a rival company became aware of the service before it could be registered as a trademark.

The original company suffered a huge loss because of that one tweet.

This bitter experience is why she turned to the services of Tokyo-based Kigyou Cyousa Center Co. (KCC), which investigates candidate backgrounds on social media to help companies eliminate potential employees. problematic.

“Businesses are afraid of problems online and of how quickly and how far they can spread once they go viral,” said Hiroshi Tsunoda, 51, head of KCC’s business department. “We live in an age where business operations can be affected if staff members post questionable content. I think companies can’t help but check if (applicants) can use social media properly.

Glued to their computer screens in any room of a multi-tenant building in Tokyo’s Iidabashi district, three KCC investigators silently looked at a job application submitted to a finance company.

Their mission was to track down the social media accounts that the job candidate, a woman in her twenties, was posting anonymously and examine the nature of her comments.

It didn’t take long for them to find out that the woman had a second job, which is against the rules of her current employer.

They wrote a report that described it as “problematic”.

Investigators spend one to two hours verifying each person before submitting a report to the client. Applicants are often assessed on a four point scoring system ranging from “A” which means they are completely free of problems, to “D” when they are not recommendable.

When the three investigators verified another candidate, a man in his twenties who was looking to join the same company as the woman, they discovered he was promoting a health product allegedly effective against the novel coronavirus on networks. social.

The Consumer Affairs Agency has warned against using this product because its marketing slogan made baseless claims at a time when many companies were trying to capitalize on public concerns amid the pandemic.

The demand for investigative services like this has grown rapidly over the past few years among actively recruiting companies.

But the practice is also controversial, with some worrying about its moral implications – especially if investigators are wrong in the details – and others wondering if it may add more signal than noise to the equation of hiring.

When asked if companies should turn to this type of third-party survey to identify problematic job candidates, an official with the Department of Health, Labor and Welfare, which regulates hiring practices, frowned upon.

“This is undesirable as there is concern that information unrelated to their skills and abilities may be collected and affect the recruitment process,” the official said.

A representative from KCC said the company only consults accounts and information made public on the internet, adding that job seekers consented to the background check when they submitted their application forms.

“We pay special attention to staying in compliance with laws and regulations,” said the representative.

BUSINESS IN THE FULLEST PANDEMIC

KCC was originally a private detective agency that offered to track people and investigate relationship issues.

But with online interviews becoming standard practice for hiring amid the pandemic, many companies are finding it increasingly difficult to get a good read from respondents.
KCC saw an opportunity and launched the service in September 2020.

Its main clients are financial institutions, IT companies, insurance companies and companies related to medicine.

KCC has now investigated the online activities of over 1,000 people on behalf of over 100 companies. He has uncovered discriminatory comments, cases of leaked classified information and other problematic cases that can make applicants non-starters.

To find their secret accounts, KCC uses their job application forms as a reference to look for anonymous accounts with the same personal information, including their place of birth, alma mater, and birthday. These accounts are compared to accounts opened under the real names of the applicants.

It also takes photos, followers, post models, and other items from their actual accounts into consideration.

At least one person she investigated had more than 10 accounts, the company said.

“They think they can hide, but they’re not thorough enough,” Tsunoda said. “They leave a lot of clues.”

Another investigative company called Soluna, based in the Chuo district of the capital, said the number of requests it received to carry out checks increased by about 2.5 times over the course of the fiscal year. ending in March 2021 compared to the previous year.

“The internet is filled with rumbles of distress related to the pandemic as it is difficult to organize face-to-face talks,” said Soluna chairman Kazunori Misawa, 53. “Companies are increasingly worried about the hidden aspects of job seekers.”

Boasting that it can shed light on the true nature of job seekers by examining their online activities, Soluna launched its “Netto no Rirekisho” (Online CV) service in FY2018 to assess whether certain candidates could be liabilities.

The company controlled nearly 30,000 people. It found that less than 30% engaged in problematic behaviors online, such as posting abusive comments, slander or misinformation.

The number of its corporate clients has grown to 390.

“It’s hard to get a handle on things once there is a backlash on something. I think they want to stay out of trouble, ”Misawa said.

The company uses its in-house software system to identify patterns to find multiple accounts used by job seekers and automatically search for nearly 450 keywords, including “moron” and “die”.

If the account is anonymous, it is closely scrutinized to determine if it is actually managed by the person in question, and four staff members will review photos of faces in conjunction with other documents for confirmation.

The company said it was careful not to violate any laws or regulations, adding that it only collects data fairly and excludes information that could lead to discrimination in the hiring process.

“You can only see their faces through resumes and interviews, for which they have painstakingly prepared. Companies have an incredibly insufficient amount of information about the true nature (of the candidates), ”Misawa said. “We need resumes for the internet age.”

The Job Security Act prohibits recruiters from collecting personal information about the race, ethnicity, place of birth, economic status, and other similar demographic details of applicants, as well as their beliefs and opinions. , their opinions on life, their favorite books and the social movements in which they express their interest.

The Ministry of Labor guidelines for business leaders require them to implement recruitment standards based on the skills and abilities of applicants.

He also warns that background checks on applicants’ families or their living conditions could result in information mixed with slanderous rumors, assumptions and prejudices.

Some experts point out that small mistakes made in screening applicants like this can have a big effect on people’s lives.

This is something that worries Hisamichi Okamura, a member of the Osaka Bar who is well versed in privacy.

“It is important to ensure that the secret accounts analyzed by the investigative firms are those used by the subjects, and that there is no confusion of accounts or theft of identity”, a he declared. “If there is a mistake, it could drastically affect the student’s life.

“If an investigative company writes a report based on the analysis of a different individual and submits it to the recruiter, it could wreak havoc on the student.

Junichiro Nakagawa, an online news editor who is well versed in social media, suggested the industry is predatory.

He said investigative companies were frantically searching for negligent social media posts made by students based on their “youthful follies” that they “unwittingly left online.”

“It is in the same vein as those who unearth the past failures of other people to arouse condemnation and find joy in bringing them down,” he said. “This background check has gone too far. If these controls were to become widespread, all of society would retreat. “

(This article was written by Kengo Ichihara and Daisuke Yajima)